Ever since Arm released the Arm® AMBA® 5 AHB5 protocol specifications, questions have arisen among users in the design and verification community—”Why AHB5?”, “What is new in AHB5?” etc. This post initiates a short series of blogs in which we will address these questions and introduce the new features of AMBA 5 AHB5.

AMBA 5 AHB5 (Advanced High Performance Bus) is a bus interface protocol, which will most widely be used with Arm Cortex-M processors for embedded designs and low latency SoCs, for IoT and embedded applications. The new features of AHB5 build upon the previous generation AHB-Lite protocol, aligning it with the AXI4 protocol. AHB5 also extends the TrustZone security foundation from the processor to the entire system. This enables a unified security solution inclusive of AXI and AHB systems, easing the SoC integration process. 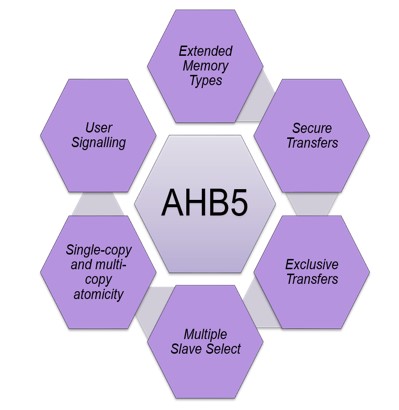 The new features in AMBA 5 AHB5 that are aligned with the AMBA AXI4 protocol include:

New interface signals have been added to the existing AHB-Lite interface, to support features like secure/non-secure and exclusive transfers. Supported/unsupported properties for new features are also defined, making it backward compatible with existing AHB-Lite protocol. AHB supports both big-endian and little-endian systems. AHB5 adds endian property to define which form of big-endian data access is supported – BE8 (Byte-invariant big-endian) and BE32 (Word-invariant big-endian). The 4-bit HPROT signal is also extended to 7-bit to support extended memory types.

AMBA 5 AHB5 features targeting area-efficiency, low-latency, and low-power are ideal for embedded and IoT solutions. The next post in this series will discuss the AHB5 new features in greater detail and how Synopsys VIP can be leveraged. Stay tuned as we explore the world of AMBA 5 AHB5!

To know more about Synopsys AMBA and other VIPs please visit   http://synopsys.com/vip.

This post is filed under AMBA, Automotive, Interconnects, Processor Subsystems, Uncategorized.
About
A global team of experts share their insights and technical expertise on the latest verification software and hardware topics.
Subscribe