MIPI Camera Serial Interface (CSI-2) is widely used as a camera interface in the mobile industry. MIPI Alliance is constantly working towards providing a solution to cater the increasing demand for higher-bandwidth and high-definition video like 1080p, 4K, and 8K. The MIPI Working Group released CSI-2 v2.0 to target emerging imaging and vision applications. It has extended the usages of CSI-2 to IoT, wearable devices, drones, Virtual Reality (VR) and Augmented Reality (AR), and automotive systems.

CSI2 is a high-bandwidth interface between a camera and a host processor. Data is transmitted using differential signals using a clock lane. The physical layer, used with CSI-2, can be D-PHY or C-PHY based on the requirements. Performance using both physical layers are scalable, which can deliver data-bandwidth up to 8 Gbps per lane or up to 24 Gbps in a three lane C-PHY system. Below figure shows the topology which can be used by a CSI-2 camera sensor and an application processor with D-PHY or C-PHY as the physical layer. 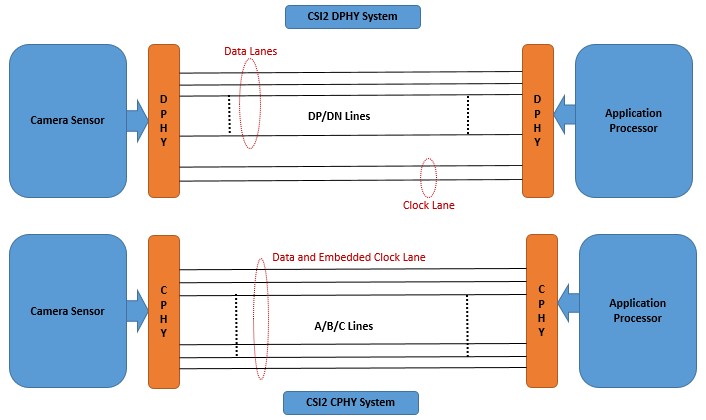 CSI-2 v2.0 supports D-PHY v2.0 and C-PHY v2.1. The following sections are a deep dive into various new features that have emerged in the latest specifications.

– Lane Scalability: A CSI-2 D-PHY system can have multiple data lanes, which is scalable, and one clock lane.

– Support for up to 32 virtual channels on C-PHY link

– Data Scrambling: The purpose is to mitigate the effects of EMI and RF self-interference by spreading the information transmission energy of the link over a possibly larger frequency band, using a data randomization technique.

New features of CSI-2 v2.0 are enabling usages of CSI-2 in the emerging sectors influenced by mobility, vision, and video. Synopsys recently announced the Industry’s First Verification IP and Test Suites for MIPI CSI-2 v2.0 and PHY Specifications. For more information on Synopsys CSI-2 and other VIPs, please visit: www.synopsys.com/vip.

This post is filed under Automotive, C-PHY, Camera, CSI, D-PHY, Interface Subsystems, MIPI, Mobile SoC.
About
A global team of experts share their insights and technical expertise on the latest verification software and hardware topics.
SUBSCRIBE