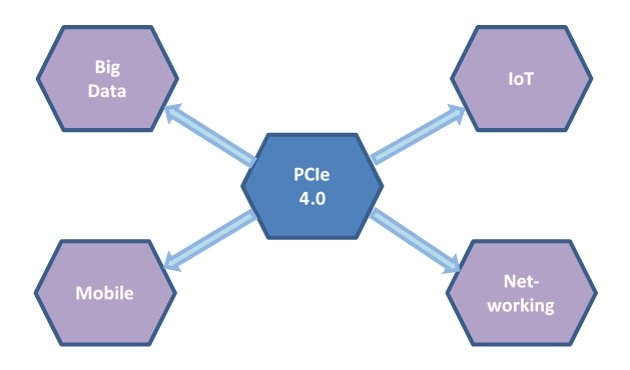 ‘Big Data’, ‘IoT’, ‘Mobile’, ‘Networking’ and ‘Storage’ applications are the key drivers for next generation high-performance systems. To meet the bandwidth requirement of the emerging applications, it was required to either increase the lane width or speed. Increasing the lane width isn’t cost effective and thus increasing speed is the best viable option. PCIe 4.0 has doubled the per lane throughput to 16GT/s, compared to 8GT/s for PCIe 3.0, delivering higher performance without increasing the lane width.

The PCIe 4.0 specification has multiple draft versions, incremental features have been added and existing features have been modified in each of the draft versions. Some of the earlier ECNs such as re-timer, DVSEC, PASID-ATS have also been added/applied to the PCIe 4.0 specification. The following list summarizes the newly added/changed features for PCIe 4.0:-

PCISIG Work Group has already announced PCIe 5.0 at the recently held PCISIG DevCon 2017. The PCIe 5.0 specifications will further increase the speed to 32 GT/s. The committee has shared that many of the PCIe 4.0 features will be reused in PCIe 5.0 with minor changes to incorporate the speed change. Below is a list of expected features in PCIe 5.0:

The upcoming PCIe blog will expand further on PCIe 4.0 features, so stay tuned.

This post is filed under NVMe, PCIe.
About
A global team of experts share their insights and technical expertise on the latest verification software and hardware topics.
SUBSCRIBE