Go Back
Verification Central
« Previous: Rapid Adoption of Synopsys VIP…
Next: Ever Wonder How USB Type-C… »

In our previous blog – Unraveling the Topologies of DisplayPort 1.4/1.3, we discussed SST (Single Stream Transport) topology in DisplayPort to transmit single stream from source to sink devices. We also touched upon basics of MST (Multi Stream Transport) topology to transmit multiple streams to single/multiple devices. In this blog we will delve into the different ways in which MST can be leveraged and how MST is used in real scenarios. We will also discuss DisplayPort over USB Type-C, the future of the Display industry.

The other way is through MST hub which provides an option to split the video stream from the source device that can be streamed to independent sink devices, which are capable of both SST and MST. As shown in the diagram below, the CPU sends three streams in MST mode to the HUB. The HUB then splits and sends Stream 01 in SST mode to Monitor M1 and sends the remaining two streams in MST mode to Monitor M2.  Monitor M2 and Monitor M3 are connected in a daisy chain fashion with M3 receiving a single stream. The advantage of using this topology allows splitting the DisplayPort MST into two or more DisplayPort streams. The setup below describes the combination of both HUB and daisy chain configurations.

DisplayPort over USB Type-C is the future of industry, which enables users with varied options of using several pins of USB Type-C hub for different use models and configurations. This will reduce the numerous cables and connectors used in our daily environment. The below diagram illustrates the Type-C hub enabling connectivity to the Monitor via DisplayPort and to the keyboard and mouse via USB port. This increases productivity by providing easy docking solutions as shown below. 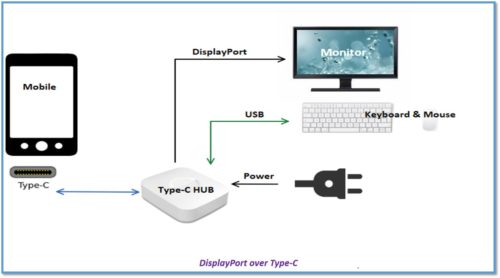 Read more about Type-C in our recent blog – What’s New with USB TYPE-C.

For more information on Synopsys’ Display and other VIP, please visit: www.synopsys.com/vip.

This post is filed under Display, DisplayPort, Type C.
About
A global team of experts share their insights and technical expertise on the latest verification software and hardware topics.
SUBSCRIBE