Unraveling the Topologies of DisplayPort 1.4/1.3

DisplayPort is a display interface used to connect a video source to any display device such as monitor, projectors etc. DisplayPort enables high resolutions with support for deep color modes, faster refresh rates, and increased bandwidth with a support for all 3D video and audio formats. DisplayPort is widely used in the PC industry with products ranging from graphic cards to laptops. It has also been adopted by mobile industry, with manufacturers like LG and Samsung using DisplayPort as a Video out port. This blog will cover different topologies of DisplayPort.

What is SST mode in DisplayPort?

SST (Single Stream Transport) topology in DisplayPort is used to transmit single stream from source to sink devices. SST mode is an enhancement to DVI and is similar to HDMI 1.4. In SST mode, audio is supported as an optional feature. SST is used to transmit other protocol packets such as I2C and USB. SST supports content protection with HDCP 1.3 and 2.2. As an example, in the below diagram, CPU/GPU stream is connected to a monitor using DisplayPort SST.   If a monitor does not support DisplayPort, a DisplayPort to VGA/DVI/HDMI converter can be used. 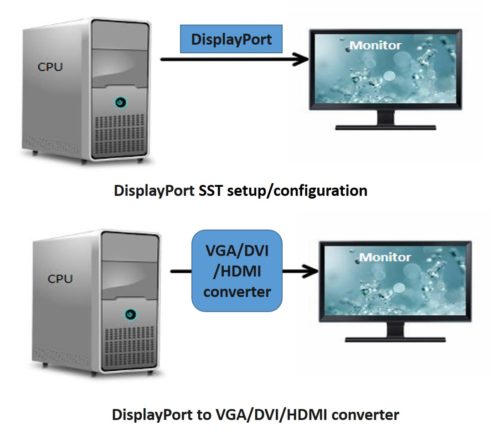 MST (Multi Stream Transport) topology in DisplayPort is used to transmit multiple streams to single/multiple devices. MST enables single DisplayPort to connect multiple devices i.e. multiple monitors. An MST sink device can support both SST and MST formats. SST is feasible if user has a single Display unit but technologies like multi view and multi-dimension displays require the system to transmit more than one stream which is handled by MST.

Read our next DisplayPort blog – Connecting DisplayPort to Multiple Devices, to understand what are the different ways in which MST can be leveraged and applications of MST. We will also talk about DisplayPort over Type-C.

This post is filed under Display, DisplayPort.
About
A global team of experts share their insights and technical expertise on the latest verification software and hardware topics.
SUBSCRIBE