After a meeting in Synopsys Building 8 this morning, a colleague said to my, “You know it’s a real problem that this (undisclosed) product doesn’t support USB audio like the Apple and Pixel 2 phones do with Type C.

My immediate response was, “Well, the chip was designed and built probably 2 years ago before the new Audio Device Class (ADC) 3.0 standard was design so that would explain it” (I know for a fact it was because the product used our customer’s chip in the design however I have to keep my mouth shut about this kind of stuff.)

The important points are as follows, if you have a device with Type C and you want to plug in your USB Type-C headphones you really, really need to read some reviews before you buy those headset USB Type-C headsets to plug into your phone.

At this time, USB Type-C audio headphones will work as follows:

So you can purchase Type-C headphones today.

They will work with the flipping over feature so they work in any orientation. (It won’t matter if you plug in the headphones upside down or right side up because it’s handled “mechanically” by the phone in the Type C Port Controller.  And if they use the standard USB audio “standard” for audio or Legacy then they should work the same as when I plug my Microsoft headset into my PC.   In my case, Microsoft standard audio drivers. As long as the phone or device has an audio driver, and the headset supports it regardless of if it’s Type-C or standard USB.

For the USB ADC 3.0 standard to work you need updates to the underlying controllers on the device (headphones) and host (phone/tablet/PC), and software changes to support ADC 3.0. So while our customers roll-out ADC 3.0 support, it will still be some time before its everywhere (even though everyone’s building and been building ADC 3.0 capable stuff now)

In case you read this article on my thoughts on trains vs. electric autonomous cars, shortly after my blog, Elon Musk talked specifically about how electric cars will actually proliferate and with ride sharing there will be MORE cars.  He has interns working on an underground tunnel system in LA that would use Electric Skates. You would enter the system via an elevator that takes up only 2 parking spaces on the surface level. Once inside the network, the Electric Skates would achieve 130 mph.  This would alleviate the surface traffic.

One other thing, if you actually read the blog on Robots, you will note that the footage of Elon Musk’s Gigafactory is generating Lithium Ion batteries so fast you can’t see the individual batteries going by.  The only way this is possible is because of robots doing all the work.  And he’s going to announce construction of 2-4 factories by the end of this year.

I guess all his employees with either be software and hardware engineers maintaining the robots or they will be interns figuring out how to build an underground tunnel system for LA that is infinitely large.

Oh, and he has a side project to build a human brain to AI interface so we can have telepathy. Yeah, that’s another side project.

I’m betting the Musk Neural Interface will use Type-C to connect to the “PC” that contains the AI. Or at least it will use USB Type-C for initial programming and charging.

Disclaimer, I have zero knowledge of Elon Musk’s companies or activities other than what I saw in this TED talk or have read on the internet when I’m not watching Iron Man movies.

Disclaimer 2: I expect Elon did not get any ideas from reading my blog and probably came up with his thinking independently of my thinking.

As usual, XKCD has some humor related at least obliquely to what I’m writing about. 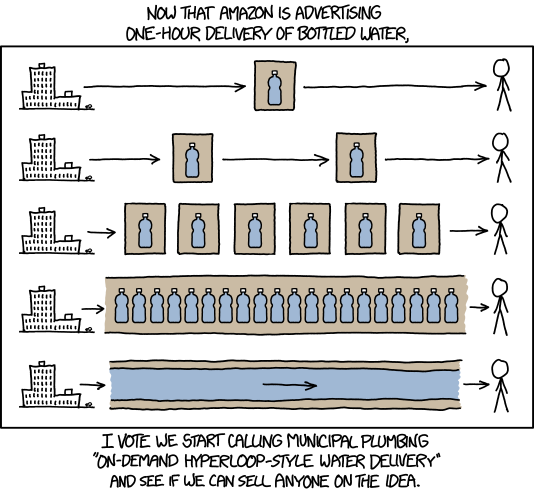