Another day on USB Authentication and USB Power Delivery.

That means lots of cables: Here’s the ones that can think of

The Default USB Power that must be supported is

With USB Power Delivery, the USB IF has defined two new logos for Charger, either a Charger or a Fast Charger designation along with the supported Wattage. For this example, we will say we have two kinds a 15W and a 45 W charger.

For 15W, the charger must support 5 V and a maximum of either 1.5 or 3.0 A for a total of 7.5 or 15 W maximum charging. This effectively replaces the Battery Charging standard.) This really doesn’t require USB Power Delivery as it’s defined already in the USB Type-C specification. .

(As a reminder, the Battery Charging specification which supported 7.5W is not applicable for Type-C)

USB Power Delivery really defines the standard above 15W. It can be implemented with either a fixed voltage or using a programmable power supply.

This allows the charger to support the nominal voltage of 5 V and a maximum of 20 A to supply a maximum of 100W.

To charge at the higher rates safely, the USB IF and IEC developed a system to allow for power supplies and devices to exchange information on their capabilities.

Power Adapters (Source) report to devices (Sink) their explicit PD Power (PDP) capabilities. The exchange is done twice to make sure it’s safe.  Then they can operate at the highest levels to maximize power throughput.  In some cases the Sink (like the PC or phone) can tell the source how much to power to provide.  For example, a sink can request more power if it needs more, and the source can ask the sink what it’s minimum power requirements are.

The reason this is useful is if you had a PC and a tablet and a phone all plugged into a single hub. The PC might need more power to operate during usage while the tablet and phone are trying to quick charge. The PC can request more power from the charger.. The charger can reduce power to charge the tablet and phone while the PC needs the power.  When the PC goes into a lower power mode or sleep mode, the hub or the PC can negotiate and reduce the power and then the power can be more evenly be distributed to all devices for charging.  You can imagine this makes Power Delivery more challenging to implement.  And potentially more dangerous as the Amps increase to as much as 20 A.  The risk for fire or shock is much greater.

Here’s the original announcement from August.

For me the most interesting sessions were presented by Microsoft and Google on proper Type-C implementations.

Essentially both companies have implemented OS features (and hardware) as necessary to avoid people blowing up their designs. If no negotiation can be done, the systems will default to the lowest power and lowest voltage so hardware and people and not burned. 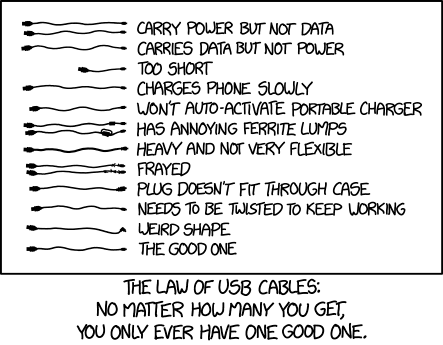 And it occurred to me that kids today probably will only ever know USB Type-C as the connector.  There won’t be anything else (except the Apple Lightning stuff I guess)