We love robots in California.

High School Students build  robots (using metal lathes) and program them for complex tasks.   In our public high schools in Silicon Valley, they compete regularly (and win) against teams around the country.  Click on the links and you’ll see teams of girls and boys.

This is the same neighborhood where a robot got beat up. 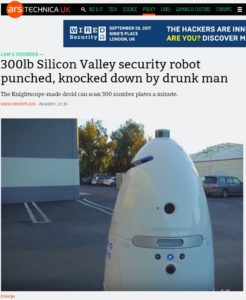 “The five-foot-tall, K5 robots can read 300 license plates per minute. They also are equipped to supply 360-degree video streaming. Once an anomaly is detected by these robots, they alert security guards. The robots are not armed.”

(My favorite line “The robots are not armed”) As if we are going to arm a parking robot.

My next thought after that was, why not just make the battery life longer on the phone?

Then I saw an ad for this item: It’s suitcase that follows you.

Even better, it can carry snacks and a change of clothing? (not sure if there’s enough space for human dignity in there after all that).

And, to personalize this, you can make the LED lights glow to a color of your choice (ostensibly so you can find it among all the other, unarmed robot suitcases).

There are multiple obvious extensions to this:

(The most hilarious part of this video is that the people riding these suitcases are fit and healthy, I wonder why they don’t just walk to their destination. But I’m the guy who wonders why Electric Bicycles exist at all).

This got me thinking about Robots in Society in General. In Japan, the aging workforce, a lack of labor, and what I’m guessing is a society that doesn’t have a lot of immigrants is reducing the productive labor pool.  So Japan is investing in a robot workforce.

What I find most uncomfortable about this article, is this robot actually looks humanoid. It has hands, and can move where people can move, and can manipulate and move things. For whatever, reason, this thing can replace a human for repetitive or complex tasks, and somehow at a price less than a human being. 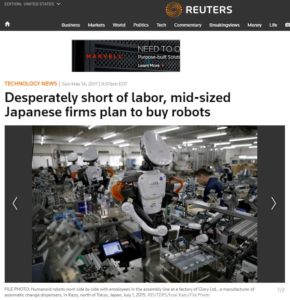 It’s only a matter of time before I can ask a robot to go to the refrigerator and get me a glass of milk (or a beer).

I have a terrible feeling we are heading toward the Dystopian future of Wall-E.

As long as humans still program robots (through USB) we will be okay. We will also need artists and liberal arts majors to be creative to build new things, to innovate.

Otherwise we are doomed. Because the Russians have already built a terminator.

So look for Armed Russian Parking Robots in 2018.

What does this have to do with USB?