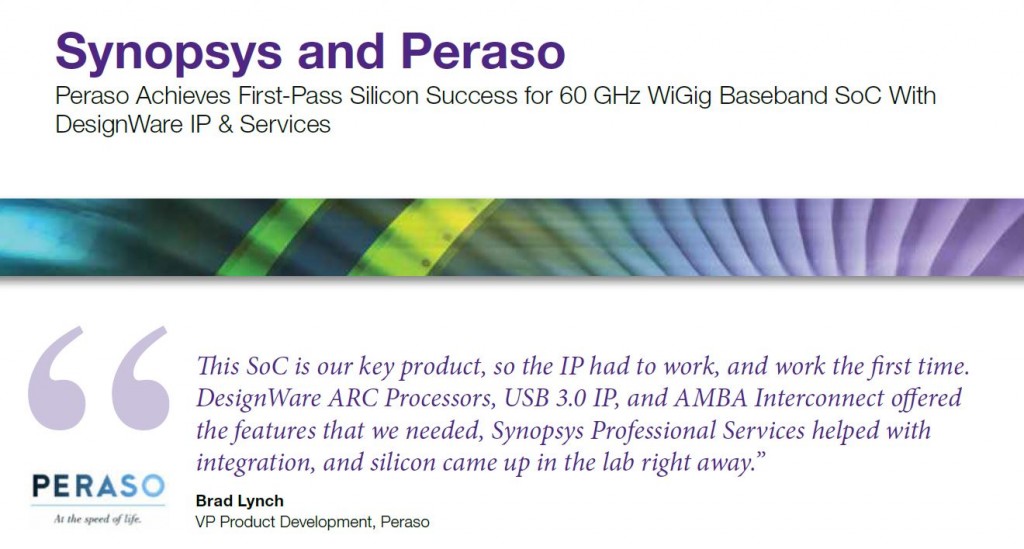 You can read the Peraso Success Story here or click on the image to the right.

Peraso used our USB 3.0 digital IP and PHY IP for USB.  They used our small, power efficient ARC microprocessor and our AMBA IP to connect the Synopsys IP to the Peraso IP.

Long before silicon, they used our HAPS FPGA-Based Prototyping platforms.  By prototyping, it helped them have first time silicon success. Watch the video below for a quick explanation from the CTO Brad Lynch of how fast they got their first silicon up with the help of HAPS prototyping and our IP.

Why would Peraso or any 802.11ad product maker choose USB 3.0?  In addition to the fact that USB 2.0 fast enough, it turns out that USB 3.0 is and will be the most common way to connect a mobile processor to a wireless chip. Having USB 3.0 as an option on that chip gives Peraso access to the entire laptop and PC market, and also the mobile phone, tablet, phablet, and mobile application processor market.  Plus the TVs and Set Top Boxes that have USB 3.0.   USB gets Peraso the widest possible market access.

The timing of Peraso’s chip and it’s availability is fantastic as the USB-IF ratified the Media Agnostic USB standard, so keep reading after the jump.  This means a USB dongle,  a device that looks like the image below could be plugged into your TV, and instantly be used to transmit data/video using 802.11ad protocols.

Oh, and you should be reading “Committed to Memory” by Marc Greenberg and Graham Allan about DDR, “Express Yourself” about PCIe by Scott Knowlton and Richard Solomon, and “Breaking the Three Laws” by Mick “I’m not dead” Posner who currently has pneumonia.  They are much funnier in person than their blogs, except for Mick is vastly funnier in person. The USB Implementers Forum (USB-IF) finalized the Media Agnostic specification which allows you to use any “media” wireless or wired to transmit data using the USB protocol.

The coolest thing about this is that you can then use USB protocols and a standardized USB driver (which will exist soon) for transmitting/receiving wireless data from a device, like the Peraso USB device.  So every PC, TV, set top box could have the standard driver, and you could plug in a Peraso or another Media Agonostic USB device in and it will “just work” the way a keyboard, mouse or flash drive works today.

So it will be super easy to use USB with the Peraso chip, or any WiFi-AD or even WiFi-AC chip.  It allows USB to use any wireless chip as way to use USB wirelessly.

You could also use a 10Gigabit per second Ethernet cable too if you wanted to because it’s “agnostic”.

I’m going to call Fortune now to see why they didn’t interview me.

Other than I’m not under 40 or influential.

Just in Case: Here’s the URLs to the Peraso Interview and the Media Agnostic USB interview in case the links above don’t work or are lost.