Mobile Payments with your Mobile Phone

TI has a concept video demonstrating how their OMAP based phones could pay for a taxi ride. I found a taxi in Tokyo that supports exactly this kind of mobile payment. The blue dot on the right is where you waive your cell phone.  In Japan the primary Near Field Communications (NFC) appears to be Felica for Felicity Card.  After reading the Wikipedia entry on FeLica I was surprised to discover it’s the de facto standard in Japan and used pretty much in every part of the world also

I couldn’t find anything on-line on the system in this Japanese cab, but I’m curious to know if it is the same or different than the TI OMAP technology, or if the OMAP platform uses FeLica or some other technology.

I found another technology called Kazzam where you could pay using an App on your iPhone.  It seems cumbersome since you have to type in the cab number and such, which to me seems harder than just swiping your phone across a blue dot.  Maybe it would work combined with FeLica so you could swipe, get the info in and just press approve.

SmartPhone Based Alternatives – Cheaper, but harder to use

But Kazzam or any App based system is a lot easier to deploy since it requires only existing Smart Phones (no special hardware in the cab or on the phone.  You just put a Smart Phone in the Cab Driver’s hand to get an acknowledgement that the person has paid. It would probably even work with a standard cell phone with a text message that says, “The person in the back seat with the iPhone 7 has just paid so you can unlock the back doors and let them out”

I love the Suica card system in Japan. You add cash to a card that uses FeLica, and you just swipe the card over a reader at the gate entrance to the train station. 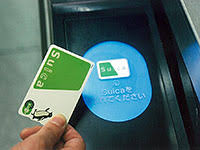 And, you can use it to buy food at train station food places and convenience stores.  It is also built into some cell phones as shown below, but most people in Japan will simply put the Suica in their wallet, or inside their cell phone case, so they don’t need to buy the cell phone with the Suica tech built into the phone.

I’m sure this exists elsewhere in the world, I just don’t get to see it.  In China, I just buy single trip tickets to ride in trains that were built in Japan.