It takes time to bring a standard solution. Starting from a problem, idea, collaboration and specification to a standard use in the market. It takes a very long time to build an eco-system around a new standard and have it proliferated in many designs.
Lets take DigRF spec for example and quickly look at the history. DigRF was established as a MIPI Alliance work group in April 2007. The goal was to develop a specification that will standardize the interface between baseband processors and RFIC’s for existing and future air traffic standards such as 2.5G, 3G, LTE and LTE-Advanced. DigRF 3G was the first specification released that addressed the dual mode 3GPP-compatible 3G /2.5G (UMTS/EGPRS) implementations and later extended to later versions of 3G. In July 2008 the DigRF 3G v3.09.04 specification was approved for release to MIPI members. This specificaiton saw some implementations but was not future-proof for higher bandwidth air links so naturaly that limited the adoption.

DigRFv4 interface was specified to target the continuous increase in air links bandwidth, demand for higher channel bandwidth, IQ sample rates and bit width, RX diversity and MIMO. In addition DigRFv4 aimed at standardizing the link between baseband and RFIC and use a scalable physical layer for that purpose as the work group envisioned the demand for higher bandwidth. DigRv4 is the first protocol that used the MIPI M-PHY due to its scalability, low power and low EMI capabilities.

In May 2010 the DigRFv4 v1.00.00 spec was approved and those vendors who were embedded in the work group and already worked on the implementation started releasing their products to the market. Here’s a link to a public release made at that time: Synopsys claims industry’s first MIPI DigRF v4 IP. And a release of DigRFv4 v1.10 spec followed this year: MIPI® Alliance Advances Radio Frequency Interface Technology in Mobile Devices.

Today we see a selection of baseband processors and RFIC’s that use this DigRFv4 interface, here are a few examples of RFIC and baseband processor solutions:
* Fujitsu RFIC
* Sequans baseband for LTE
* Marvell LTE thin modem

The key point here is that every standard requires a lot of effort to enable a strong eco-system that can support design, verification, testing, production. The devices referenced above are examples of collaboration between many companies which allow to support these interfaces on the mobile devices we use today.

And some very important things that are sometimes neglected:
1. prototyping system that allows to validate design functionality and develop the IC and system around it prior to taping out or receiving silicon back
2. interoperability with devices commonly found in the market to avoid failures in the field 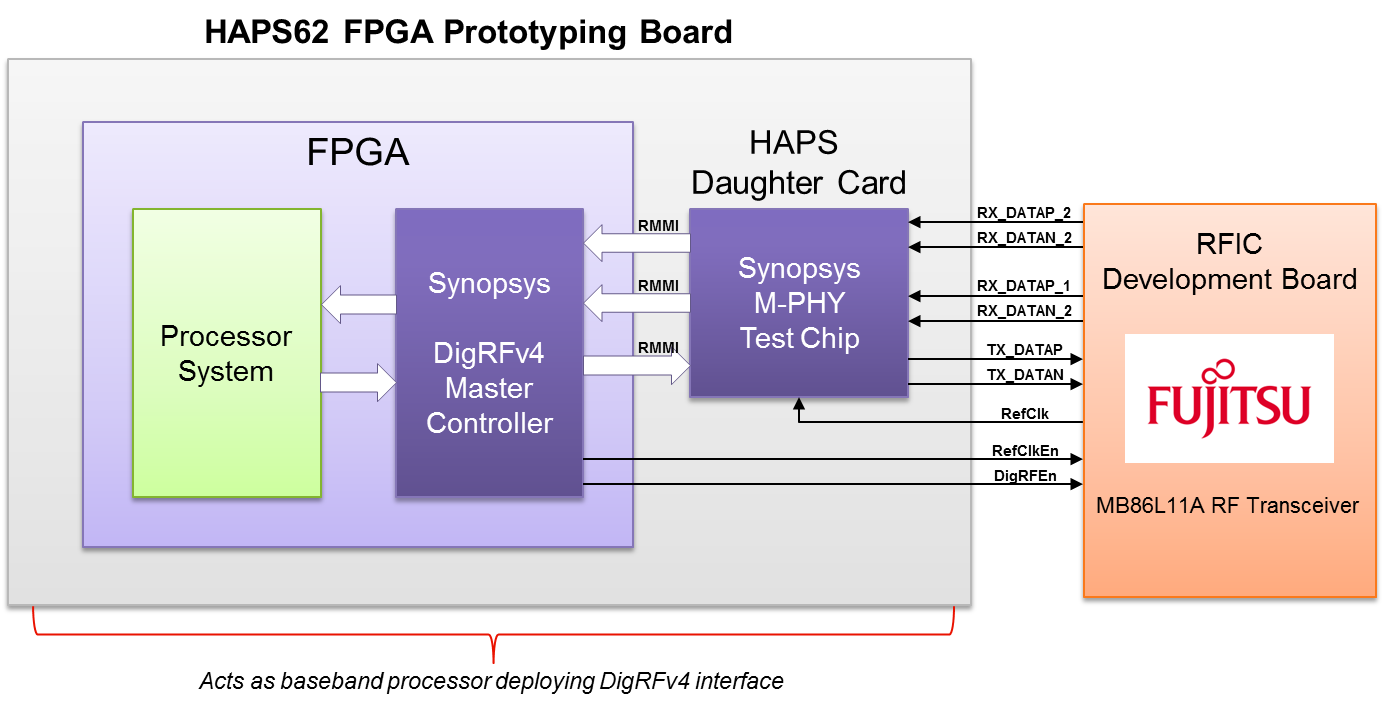 Covering these two points is illustrated in the diagram above and video we prepared that shows DigRFv4 implementation for baseband processor connecting with off-the-shelf RFIC.
So next time you consider to adopt a standard do check if a prototyping platform is available and if interoperability was tested, this will save you a lot of effort, remove risk in adopting the new standard. In other words Synopsys assists in speeding time-to-standard.

Last on a more personal note:
I don’t know if TTS was coined already for Time-To-Standard, I’m aware of TTS with reference to Text-to-Speech as I was the marketing manager for the single-chip SoC supporting text-to-speech algorithm. See datasheet of this SoC here in case you’re interested in this ~10 year old technology from ISD/Winbond.