It’s probably one of the most important milestones for the MIPI alliance in my humble opinion. Having made inroads into mobile markets with several specifications, camera CSI-2, display DSI, DigRF and D-PHY to name a few, now it’s the turn of the M-PHY. The most scalable, low power physical layer that can serve multiple end-applications (or protocols). Six end-applications to be precise, yes SIX. 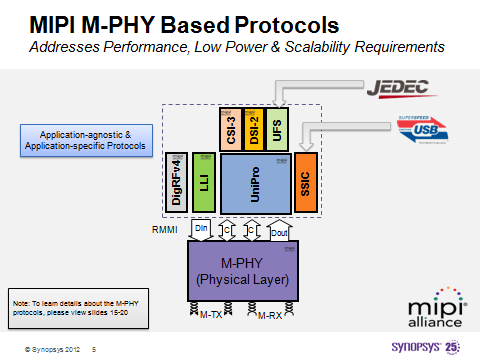 You may ask, but the M-PHY specification (v1.0) was released several months ago, so why are we discussing this now?
The question is not just M-PHY specification (v1.0 or future ones) but to have enough momentum from the end-application side to drive demand for the M-PHY. DigRFv4 protocol was driving initial M-PHY adoption for Gear1 functionality (see video of silicon proven M-PHY Gear1 operation ). Last year JEDEC UFS spec was released in March 2011 and this week MIPI Alliance announced the availability of MIPI Low Latency Interface (LLI) specification.
Synopsys announced its 28nm Multigear M-PHY, first to be used for future-proof the design for protocol enhancement leveraging the scalability of the M-PHY enabling IP reuse. Synopsys also announced a joint LLI solution, by providing the M-PHY and Arteris provides its LLI controller to form pre-verified solution and reduce risk of integration. LLI is complex (I’ll touch on this in a later post) and you need to partner with IP companies that can help you cross the raging waters. 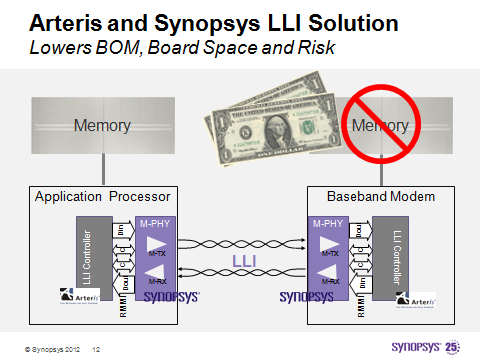 Last, I’m in Barcelona Mobile World Congress this week and want to share with you a video of Nokia’s PureView 808 smartphone which has 41 MegaPixel camera capability (Yes, Fourty One Mega Pixel). The short video shows a picture that was taken and how you can zoom to check out small details like a snow flake in your hair.

With data rates increasing dramatically you’ll need to store (or playback) the image taken rapidly, you’ll need to send the image wirelessly. All of these require high speed and low power interfaces to enable this high performance communication and JEDEC UFS (based on MIPI Unipro, MIPI M-PHY) and MIPI LLI (based on MIPI M-PHY) can help Mobile device manufacturers achieve that.