What application sells most image sensors in the world? As you probably figure out it is not Digital Still Camera or other consumer electronics used to capture photos or videos like a camcorder.
Almost every mobile phone comes with a camera (image sensor), same with tablets. Sometimes 2 cameras are standard feature, capturing front and back. Based on latest information from iSuppli mobile handset account for ~ 1.66 billion Image sensor units shipped out of a total of 2.1 billion CMOS image sensors (79%). But there are both CMOS and CCD image sensors.
You can find CMOS and CCD image sensors and these are two different technologies for capturing images digitally, both convert light into electric charge and process it into electronic signals. 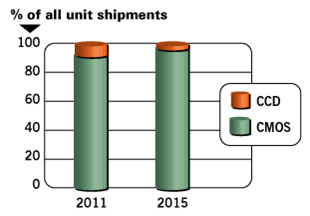 With benefits of longer battery life, area saving and reduced manufacturing cost CMOS sensors are the clear winner in most applications. Well, once you mention lower power and standard semiconductor manufacturing then it’s a great fit for low power, high volume mobile applications.

And what’s the distribution by application out of this growing CMOS Image sensor shipments?
First are Mobile handsets representing 79% of total CMOS shipments in 2011 followed by Video conferencing application. % of the other applications are not mentioned but we can assume they are far behind these high volume applications, well with about 80% of the market taken there is nothing much left.

No doubt in my mind that CMOS sensors will continue to dominate and that mobile will continue to be the leading application for these image sensor even more than today. That only says good things about mobile interfaces used in mobile electronics to intact with image sensors and that is also good news for other applications observing growth such as: consumer video conferencing, intelligent video cameras for surveillance networks, automotive safety systems like blind-spot detection or lane-departure warnings, industrial machine ‘vision’, medical imaging, toys and games, and infrared night vision.

Last comment, the Mobile World Congress 2012 is just around the corner. Synopsys will have presence in the MIPI alliance booth and a meeting suite and I plan to be there. Hope to see you in Barcelona!