Back in the early 21st century when Internet was deploying rapidly there was a continuous and exponential growth in internet bandwidth user requirements. Nowadays internet speeds of 5Mb to 50Mb or even more are common residential speeds used and although demand for higher speed continues to grow the change is not exponential as it was 10 years ago.
It seems that what happened with internet speeds for the home (and business) is happening for the mobile internet. For ‘smart’ devices that have more than voice and texting capabilities 2G speeds are simply inadequate and 3G speeds seems to provide a somewhat of slow connection for content consumption. Consumers are used to business environment or WiFi speeds and expect to receive similar performance from their cellular carrier when WiFi is not available in their surroundings.
I believe it is a common belief that Mobile internet will follow WiFi bandwidth trends although will continue to lag and will proceed advancing more rapidly until it reaches a reasonable bandwidth range. Therefore 3G speeds most of us use with their smartphones (including me) will not stay here for long especially with the introduction of LTE-capable phones and networks around the world.

Also, bear in mind that although LTE provides a great improvement over previous network speeds, what we really would like to see is a true 4G capability as promised by the LTE-advanced technology which will arrive sometime later (2013?). See a table comparing capabilities of common cellular networks for your reference.

There are several smartphones and other mobile devices capable of providing LTE speeds (including my spouse’ Samsung Galaxy S2 skyrocket) however you need to have LTE-capable cellular network to benefit from the speeds and that will also take a while to expand.
Looking at the U.S (I apologize for international readers) Verizon had >500,000 LTE subscribers back in April 2011 and has the largest nationwide coverage, while AT&T launched its LTE network in 5 markets in the summer of 2012.
Metrico published a report that compares the performance of the networks but I’m not sure it’s a fair comparison as performance degrades when you have more subscribers and the devices used are not identical as well. But it is still fun to look at… and for our discussion realizing that LTE provides 6 to 8 times the bandwidth compared to previous 3G technology. 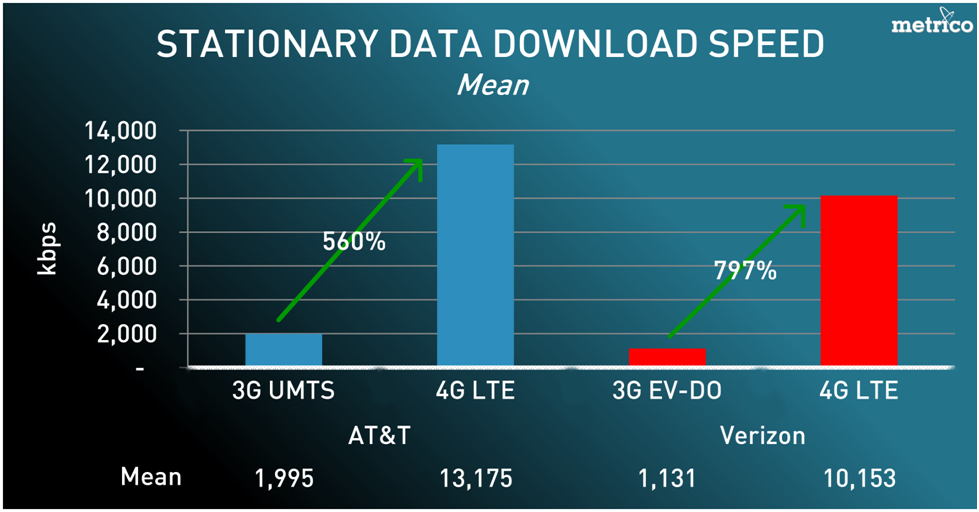 And there is that small issue of battery life… which I’ll talk about in one of the next posts.