China is the Future (and Present)

This is what some people say, others may say that China is the present. Putting my mobile hat on (see pic below) I believe that current mobile electronics usage and penetration in China has only started and although there are impressive numbers in terms of volume shipment there is a tremendous growth potential for both high end and low end devices.

I read this release from Strategy Analytics: China Overtakes United States as World’s Largest Smartphone Market in Q3 2011 which made several observations.

Smartphone shipments in China grew 58 percent sequentially to reach a record 23.9 million units in during Q3 2011. This resulted with China passing the United States in terms of volume for the first time to become the world’s largest smartphone market by volume however the United States remains the world’s largest smartphone market by revenue.
One more interesting point was to look at the major vendors in China and USA, see graph below. 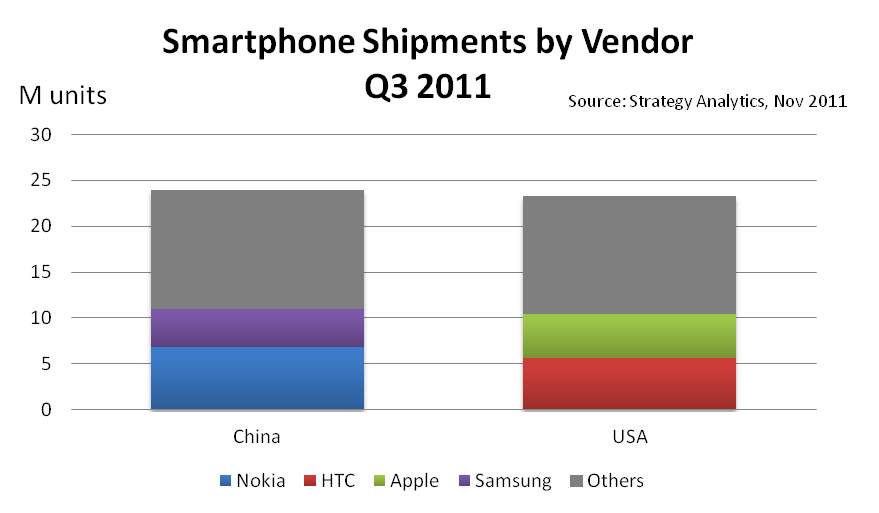 The graph tells us few things, first Nokia is in the lead and Apple is not there. The ‘others’ category which is >50% hides multiple vendors including local Chinese vendors such as ZTE and Huawei that believe to be doing well in the Chinese markets.
The smartphone market in China shows signs of growth in terms of units but the fact that it lags U.S in terms of revenue can hint to some or all of the following:
– Higher volume of lower-end smartphone shippments compared to U.S
– Adoption of lower cost local brands something U.S doesn’t have
– Heavy subsidizing by operators

One point to make, Nokia was the most popular smartphone brand in China (per Strategy Analytics) with 6.8M units out of a worldwide total smartphone shipments of about 17M units in Q3 2011. This can tells us that Nokia’s penetration in China is strong and its past quarters decline was mostly in western markets. This is also positive for Nokia as the customer base could potentially be sold on the next smartphones Nokia plans to roll out assuming they can afford that.
The tradeoff between smartphone feature set and cost will be key in the next couple of quarters but China’s current bias towards lower-end / lower-cost smartphone means there is much room for growth.

So indeed China might be both the present and the future as it relates to mobile electronics.

As we discuss growth in China mobile electronics, I wanted to share with you this link to an educational webinar recorded in Chinese (这个网络研讨会采用中文录制。) that explains the latest MIPI protocols and interfaces that are used currently (and in the future) to ‘power’ the smartphones we discussed in this post.
Register here to view and listen or send it to your Chinese-speaking friends so they could enjoy this educational resource.