Go Back
On The Move
« Previous: Got (mobile SoC) Subsystem?
Next: MIPI Interoperability and… »

The second quarter of 2011 will be remembered as an inflection point in the mobile industry with Apple becoming the world’s top smartphone vendor by shipping 20.3 million Smartphones. Nokia continued its decline, down by 34 percent from the same quarter last year and shipped 16.7 million units in the second quarter, with vendors like HTC and Samsung continue to stay behind.
It’s important to note however that Samsung shows fantastic market share growth from a slim 3% in the first quarter of 2011 to 13% of smartphones sold in the first quarter this year. Other growing OEM’s include HTC, Sony Ericsson and LG.
Apple’s iPhone dominancy in smartphone doesn’t translate to leadership in smartphone operating system as Android leads the game mostly due to the fact that Android operating system is used by multiple smartphone manufacturers.
According to latest report by IMS research smartphone shipments in 2011 will reach 420 million units, taking 28% of the total handset market. The research firm also predicts smartphone volumes to reach 1 billion units in 2016 mostly due to lower end smartphones.
Here’s a graph (courtesy of IMS research) comparing OEM smartphone shipments in Q1 2011 with Q1 2010: 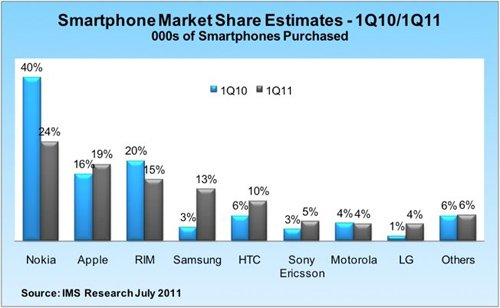 Last point I wanted to share with you is that these smartphone unit projections are not easy to make and predict the rate consumers change models and adoption or migration rate from ‘regular’ handsets. One more factor that needs to be taken into account is people damaging, losing their smartphone or god forbid dropping their smartphones to the toilet.
Based on recent report google made, about 39 percent of the people surveyed admitted they took their smartphones into the bathroom at some point.

Ignoring health hazards that can be associated with touch screen technology (covered in this interesting blog U Can’t Touch This), I also looked at another study from plaxo which tells us that 19% (!!) drop their phones in the toilet and total of 1/3 of users damage or lose their phones. 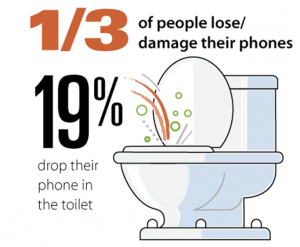 My question is about the 1 billion units projected in 2016, did IMS research account for the bad habits and damages by the users or should the prediction be 1.3 billion units?