We are back with the continued interview with Eric Esteve of IP Nest. Check previous posts for Q&A we covered earlier.

Q: What are the main roadblocks for MIPI specifications to get faster adoption?
A: I suggest to have a look at the MIPI IC forecast for 2010-2015 built by IPnest and reused on the MIPI Alliance web site.

In the PC segment, we can take the 3G (or 4G) wireless powered Netbook (we use the “Netbook” terminology for the x86 CPU -Intel Atom family, or AMD family- based Mobile PCs) as a good candidate and it can use these MIPI functions:
– DigRF could be widely adopted when a wireless 3G or 4G connection will be added to a Netbook.
– CSI specification to be used when a camera will be added, the price of the Camera controller IC is going down drastically due to the very high production level targeted to the Wireless Handset segment.

This assumption implies that these MIPI functions would have to be integrated in the main processor. As a consequence, it also implies that Intel will support MIPI technology. I had the opportunity to rise this question during the MIPI “All members Conference” in March (Osaka, Japan) and I had a positive feedback from the audience: the industry expects Intel to support MIPI technology… we all know how important it is when Intel supports –or not- a certain specification, for the successful deployment of the technology!

In the Consumer Electronic segment, all the mobile devices could be good candidates. Let’s take as an example the handheld game console. We think this system could use three MIPI functions:
– CSI specification to be used to Interface the Camera Controller IC with the main System on Chip (for the same reasons than Netbook: attractive production cost of the MIPI powered camera chip, and to lower power consumption)
– DSI specification to be used to Interface the main System on Chip with the Display sub system
– SLIMbus function could benefit from the efforts of many audio codec, application processor, and other companies producing the Serial Low-power Interchip Media Bus (SLIMbus®) Specification

Nevertheless, because both Synopsys and IPnest are focused on IP rather than on IC, IPnest has worked a MIPI IP Market forecast for the 2010-2015 period: 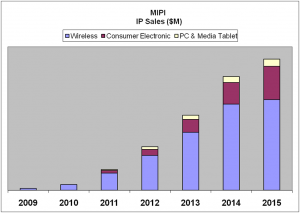 Q: Last thoughts about the mobile computing space as compared to traditional computing, storage, enterprise segments? How do you think the future will look like?
A: During the last few years, the most drastic change we have seen in the mobile computing space has been the democratization. Ten years ago, a mobile computer was reserved to people with high revenue – or working for a company who could decide to allocate them such a system. There was a first revolution: the emergence of Netbook, these low cost Notebooks that anybody could afford. The second revolution was the emergence of the Smartbook, expensive for a mobile phone… but very cheap as a computer! Both of these have not only cannibalized the Notebook segment but also created a new segment: the affordable but powerful (in terms of computing and applications) mobile, connected devices. To be affordable, these devices needs to be as “light” as possible: no HDD, a low cost operating system (Android or iOS) and to be powerful, they need to be able to connect externally with as many external devices as possible: an external large storage medium (SATA), some lighter storage media (MMC and SD controller), a TV (HDMI), several, versatile, electronic device (so the use of several USB 2.0 and now USB 3.0). To be powerful, but with low power consumption, such device have to integrate different MIPI specifications (CSI, DSI, DigRF, UFS and so on), one or more memory controller to guarantee an efficient computing (LPDDRn), an internal Mass storage controller (UFS).
I think the future of the mobile computing space is high computing power, but low power consumption, wireless connectivity (3G or 4G) and as many wired connectivity interfaces as it make sense. This is why a wireless application processor is really a flagship for the IP business in general (ARM, Imagination Technologies and the IP vendors providing all the above listed Interfaces) … and a serious threat for the still alive Wintel monopoly! Remember: low cost –if not free- OS, and IP based computing and connecting power…

Eric, thanks a lot for your thoughts. I’m sure this information will be appreciated by all readers interested in mobile electronics, semiconductor, tools, IP and eco-system.

A reminder to all, if you want to purchase one of Eric’s reports, go to http://www.ip-nest.com/index.php?page=wired or email Eric at eric.esteve@ip-nest.com.