Beware the Ides of March!

Anyway, the idea behind this posting was spawned by a new purchase I made near the end of 2016 – in a sense, finally putting my very own money where my mouth is 😀  Hopefully you’ve been reading ExpressYourself (ok, ok, reading it when I finally POST to it) long enough to remember Scott’s and my discourses on 4K video and PCIe in low-power applications and perhaps if you have a really good memory, even the introduction of 2-in-1s…

Well, actually, I am!  Thanks to some new internal security rules, it’s become practically impossible to use our Synopsys PCs for personal email and data storage, so I’d been shopping for a personal computer with pretty conflicted requirements: small, light, big screen, good battery life, runs Outlook for email, enough horsepower for video and photo editing, cheap, plenty of storage space, etc…  I had picked up an inexpensive 2-in-1 a year or so ago: 10″ screen (1280×800), Atom processor, 2GB RAM, 64GB storage and starting using that.  I liked the detachable keyboard and soon started using the “tablet” portion for movie-watching and such for the light weight, while using both together for email and word-processing and email.  However, I soon started carrying a portable hard drive to store those movies on, and quickly realized that while the CPU was great for battery life, it pretty much stunk for video editing.

One day while looking around Amazon, I stumbled across a 3rd party seller offering factory-refurbished Dell 2-in-1s with specs too good to be true: core m7 CPU, 8GB, 512GB SSD, Full HD (1920×1080) display, detachable keyboard.  Exact specifications are often difficult to determine in cases like this, since manufacturers offer many built-to-order options and the model # of a machine isn’t enough to tell the details – like whether the SSD is SATA or PCIe.  When the machine arrived, I discovered happily that it has a PCI Express SSD using NVMe, and in fact the 4K (3840 x 2160) display instead of the advertised FHD. 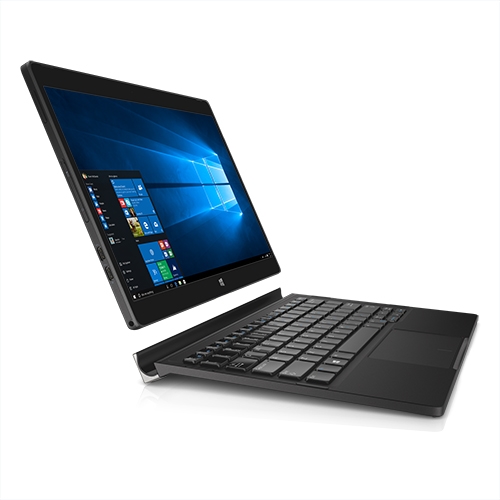 So what does Richard’s new “toy” have to do with PCIe?  Well, this is the real-world culmination of all those previous blog postings!  4K video over PCIe? Check! (Ok, so I was talking about it in Gen4 and this is using Gen3.)  PCI Express in your disks? Check!  WiFi over PCIe? Check!  Due to a flakey keyboard connection, I got to have a detailed internal view of my new machine – and see that the SSD, WiFi, and (sadly unpopulated on mine) WWAN are *all* PCI Express and all using various “flavors” of M.2.  I also saw the cell-phone-sized battery that was all Dell had room for, so battery life on this one isn’t going to be all-day, but I can work around that.

I wasn’t sure I should even bring this up, since my friends Eric and Mick over at To USB or Not to USB will probably start hassling me over it, but the ONLY connectors on this machine are the aforementioned (proprietary) magnetic keyboard attach and two USB Type-C connectors…. Maybe I’ll drop in over on their blog sometime for a guest posting on living with USB Type-C.

So anyway, if you hear someone doubting the utility of PCIe in mobile, you can feel free to tell them “Well, I know a guy…” 🙂  I’m carrying this little gem around with me on all my travels now, so feel free to check it out in person next time you see me!  Which makes a nice segue* into some upcoming events:

I’ll close with the usual pleas to subscribe to ExpressYourself  by clicking here for RSS or here for email and a reminder to help me out with topic ideas for Flashback to Basics Fridays.  Those seem to be postings that folks like, but I need some more ideas!  Heck give me some ideas for good bribes, errr prizes, for ideas even.

*Segue, not to be confused with Segway!

**I’m not kidding about dinner, but it’s not really *my* treat per-se, it’s courtesy of PCI-SIG.  Those of you who made it to the PCI-SIG 20th Anniversary will remember it being loads of fun – and will know to brush up on your PCI-SIG history before dinner.  Hint, hint, hint.