PCI Express… in Your Disks??? 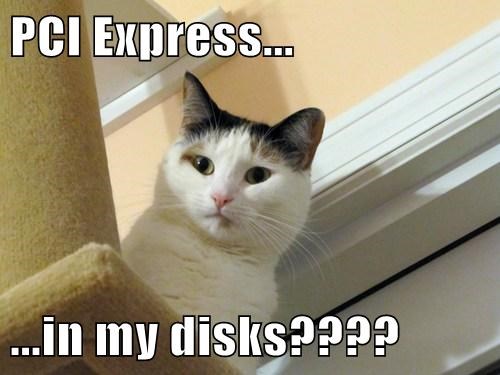 We talk here a lot about “PCI Express Everywhere” and yesterday’s release of SATA Express by the SATA-IO group formalizes PCI Express as the successor to SATA, so now PCI Express really is in your disks.  Okay, Okay, mostly in your square (solid state) disks – though I’ve heard talk from a few rotating media people that they might build some PCIe-based magnetic disk drives too.  This news won’t be a surprise to many folks however, especially those who’ve heard me talk at PCI-SIG Devcons over the last year or so.

Keeping down the costs of cables for interfaces like SATA Express was one of the prime motivators behind the SRIS (Separate Refclk Independent SSC) ECN released by PCI-SIG back in January.  SRIS extends PCIe to support Spread Spectrum Clocking even when the two link partners do NOT share a common reference clock – which they do in typical PC add-in cards.  This allows cables like PCI-SIG’s own OcuLink or the SATA Express cable to avoid carrying and shielding a jitter-critical clock signal across them.

Aside from being a triumph of nested acronyms, that ECN set the stage for SATA-IO to specify a clever scheme by which an end user can plug either a “classic” SATA device or a new PCIe-based SATA Express device into a new SATA Express host port.  The host is responsible for detecting the type of device (via a pin on the connector) and making either a connection to a classic SATA host controller or a PCI Express x2 port.  “What? A by two PCIe port – why that?” you ask.  Well, when SATA Express was originally conceived, it was thought that the first implementations might only be PCI Express 5GT/s (Gen2) and so a x2 port was needed to make SATA Express faster than SATA 6Gb/s.  (Two lanes of 5GT/s PCIe provide 1GB/sec vs the 600MB/s of one lane of SATA 6Gb/s.)  Naturally as PCIe runs at 8GT/s today (Gen3) and 16GT/s in a few years, the SATA Express connector provides up to 2GB/s today and 4GB/s once PCIe 4.0 is completed.

One interesting thing to me about SATA Express is that it’s invisible to software.  If a “classic” SATA device is plugged in, the host connects the SATA serial lines to its “classic” onboard SATA Host Controller – which software accesses via the AHCI programming model.  If a SATA Express device is plugged in, the host connects the PCIe serial lines to a PCIe root port and the device gets enumerated and mapped like any other PCIe endpoint would.  The magic comes about because SATA Express devices support an AHCI programming model internally – so to the operating system they look just like a “classic” SATA host controller.  Mr. Winnix can remain blissfully unaware that there is no actual SATA taking place.

I can hear you all shouting “Wait a minute now!  You just said there’s no SATA in SATA Express?!?!?”

Brilliant isn’t it?  In one fell swoop SATA-IO has left all that messy analog PHY stuff to the wizards at PCI-SIG, and enabled a software-invisible transition to an interface better suited to the bandwidth needs of solid-state disks.  SATA Express can live on as long as software wants to support AHCI, and can leverage PCI Express speed increases until we run out of electrons.  Getting specifications through standards bodies is often described as being akin to herding cats (now you understand the intro picture) and SATA-IO has managed to neatly herd all theirs under another umbrella.

A word of caution: with SATA Express being all the buzz, some folks are out there selling “SATA Express” cores promising to hide all the messy bits of PCIe and AHCI (and/or NVMe even) in one big blob-o-logic.  Getting the most performance out of a PCI Express storage device generally calls for pretty tight integration between your actual non-volatile memory controller (flash, memrister, quantum nodality*, whatever) and the PCI Express interface.  Trying to use a one-size-fits-all approach here is not likely to win your product any performance accolades – ’nuff said.

If you haven’t already clicked through the links above, please head on over to SATA-IO to see the new specification, and of course check out Synopsys’ DesignWare offerings in SATA and PCIe to see how we can enable your next SATA Express design.  If you need help, please contact us, and as always feel free to leave comments below (unless you’re a scammer peddling a weight-loss program, body-part-enhancing supplement, or other similar junk filling my comment-approval queue, in which case please send those directly to /dev/null).

(Note that some links above are to members-only areas of PCI-SIG or SATA-IO websites, if they don’t work for you, check to see if your company is a member of those organizations.)